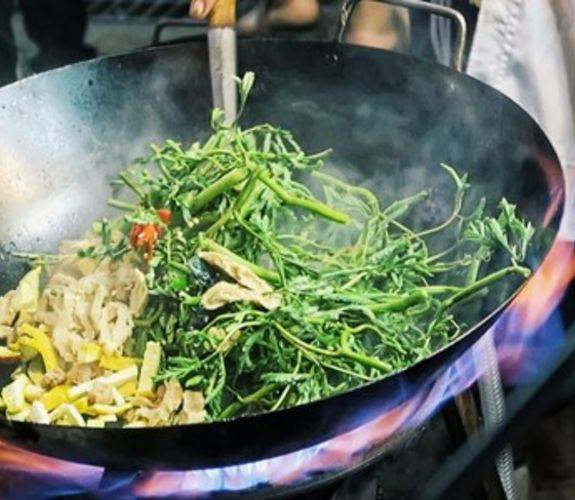 The Vegetarian Festival in Bangkok usually falls in late September or October, with exact dates changing yearly according to the Chinese Lunar Calendar. This Taoist celebration is called Tetsagan Gin Jay - Tetsagan means festival, while Gin Jay means to eat Chinese vegetarian food. In Thailand the festival takes place for nine days throughout the country, as well as in Malaysia, Singapore and Vietnam.

The vegetarian festival was originally brought to Phuket and Trang, in the south of Thailand, by Chinese boatmen in the 19th century. These Chinese had strong beliefs in Taoism who worship nine Gods. These gods are believed to take the form of planets and have direct influence on the five elements - earth, water, wind, fire and gold - that make up the physical body. Initially, only the Chinese-Thai took part in the vegetarian festivals but over time it has grown into a nationwide celebration and there are many devoted Chinese-Thais who eat "Jay" food all year round.

In Bangkok, Chinatown is the gathering point for the festivities and you will find rows of temporary stalls selling a wide range of dishes from sweet cakes to noodle soups. There are a lot of activities around Wat Mangkon Kamalawat and, on the edge of Chinatown, the Talat Noi community comes alive with a host of activities.

Apart from the official celebrations, it's fun to walk around to see the "Jay" dishes made from ingredients that look like squid, shrimp, meatballs and even sea cucumber but which are actually made from soy beans, tofu and vegetables. The main source of calcium is roasted black sesame seeds whilst the popular Thai fish sauce is replaced by soy or mushroom sauce.

During this period you will see many yellow flags all around the city, which means that vendors are selling "Jay" food. Vegetarian food is everywhere and even 7-11's will have a special selection for the festival. People observing the festival should abstain from eating meat, animal oil, and pungent-smelling vegetables such as garlic, onion or chives.

The ninth day of the festival is its climax. There will be merit-making ceremonies, offerings to dead spirits and a large procession that draws many devotees, to send the deities back to the river. Don't miss out on this fascinating Chinese festival if you are a guest at Riva Arun, or the delicious vegetarian foods which abound in Bangkok and are available at Above Riva during this period.