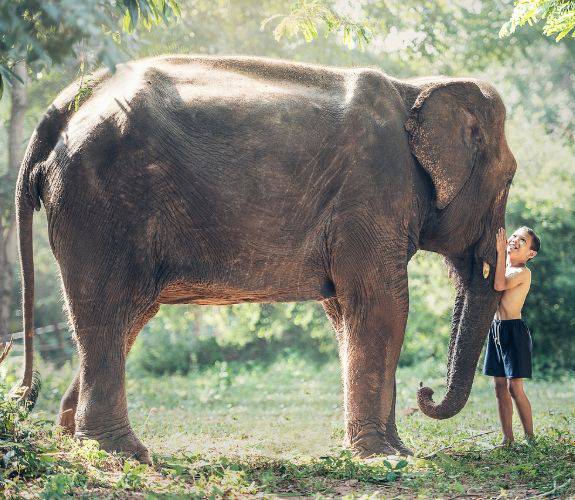 National Thai Elephant Day was established by the Thai government in 1998. It is annually celebrated on March 13th, which is the anniversary of the white elephant being added to the old version of the Thai national flag.

Elephants have always been an important part of Thailand's history, but despite the fact that they are a protected species in Thailand, their numbers have drastically been declining over the last century. Nowadays, about 3,000 - 4,000 elephants live in Thailand, the majority in captivity.

Friends of the Asian Elephant was established in 1993 to protect and conserve the welfare of elephants in Thailand. FAE's elephant hospital provides free medical care for sick and injured elephants, as well as education for mahouts and keepers. Its Mobile Vets Project sends teams throughout Northern Thailand to diagnose and treat elephants. It also works collaboratively with other organizations to advocate elephant welfare.

Elephant Parade was inspired by a true story of a brave elephant named Mosha, who had lost her leg after treading on a landmine. Father and son, Marc and Mike Spits were so moved by Mosha's story that they founded Elephant Parade in 2006 to help raise money for a prosthetic leg and the important work undertaken by Friends of the Asian Elephant Hospital and elephant conservation in general. Their worldwide art exhibitions and elephant merchandise bring joy to millions of people and create awareness and funds for elephant conservation.

For more information about these organizations please see the links below:
www.friendsoftheasianelephant.org
www.elephantparade.com
Back
Share this news