A History of Fireworks 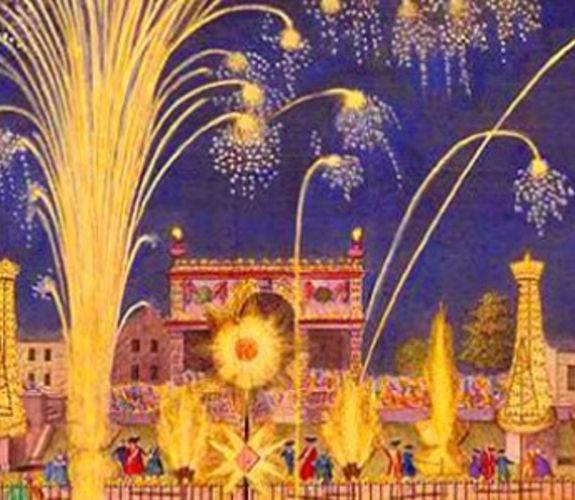 Between 600 and 800 AD, Chinese alchemists accidentally mixed saltpeter with sulphur and charcoal, inadvertently stumbling across the crude chemical recipe for gunpowder. Supposedly, they had been searching for an elixir for immortality!

In later times, gunpowder was packed into small containers to mimic the sound of the exploding bamboo. These exploding packages were known as "bauzhan" and by the 11th or 12th century this term was used to specifically define gunpowder fireworks.

While Marco Polo did return from China in 1295 with fireworks, some argue that Europeans were likely exposed to gunpowder somewhat earlier during the Crusades, as their Arab enemies already had some gunpowder-driven weaponry which had no doubt spread along the Silk Road to the Middle East despite the best efforts of the Chinese to retain the "technology" for themselves.

By the 15th century, fireworks were widely used in religious festivals and public entertainment. The Italians were the first Europeans to manufacture fireworks and European rulers were especially fond of using fireworks to "enchant their subjects and illuminate their castles on important occasions".

Prior to the 19th century and the advent of modern chemistry, fireworks must have been relatively dull and unexciting but in 1786 Bertholet discovered that oxidations with various chemicals produced intense emissions of bright colours. The isolation of metallic magnesium and aluminium marked another breakthrough as these metals burn with an intense silvery light.

Most modern fireworks displays use aerial shells, which resemble ice cream cones. Developed in the 1830's by Italian pyrotechnicians, the shells contain fuel in the cone bottom, whilst the area above contains an outer layer of pyrotechnic stars, or tiny balls containing the chemicals required to produce the required colours, together with an inner bursting charge. Today, the shape of the firework is a product of the "inner anatomy" of the aerial shell or rocket.

NB: Fireworks aren't for everybody! Dogs whimper, cats hide under the bed and birds become so disorientated that they fly into things. Even some people have an extreme fear of fireworks or noise phobia!
Back
Share this news